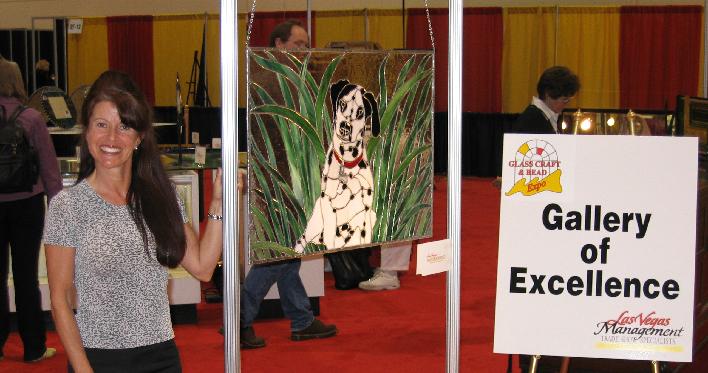 I am a native of Las Vegas, Nevada, rare but true.  For the first part of my life I focused on the left side of my brain.  I became a CPA and received a MBA from the University of Texas at Austin.   However, I was restless behind a desk so I became group fitness instructor and a personal trainer and ultimately purchased my own Women’s Health Club.   In my spare time I earned my commercial helicopter pilot’s license.  But I was still missing my creative side.  My mother is an artist and I was exposed to a variety of art growing up.   My favorite art form, stained glass, became my passion, where my love of animals and underwater photography assists me in designing vibrant, original glass works of art.

I was the featured artist in the January 2009 Edition of the Summerlin Home News. My article  “Pet Portraits Come to Life”, The Vitri-Fusáille Way was published in the Fall 2011 issue of “Glass Craftsman” magazine. In the July/August 2014 issue of Glass Art Magazine, “Poppy Field” , the collaborative article I wrote with Cathy Claycomb was highlighted under the” Independent Artist” category. My article “Designing Your Dream Home Studio”  was published  by Glass Patterns Quarterly online March 2019. My Exhibit “Bringing Animals and Nature to Life in Stained Glass” was shown at the Summerlin Library Gallery and the Enterprise Library Gallery in Las Vegas, Nevada in the Spring and Fall of 2009. I was a part of the publication of CRAVE Las Vegas, the ultimate guide to women-owned businesses in Las Vegas, as shown below. 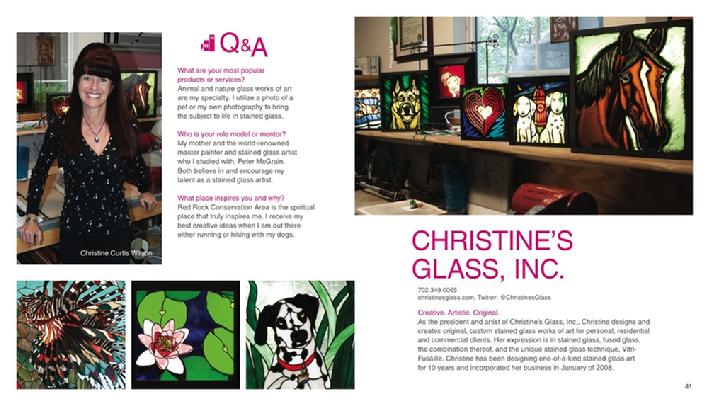